Warrior (Chinese: ) is a tank class in Eden Eternal. It is available at character creation.[1]

Unshakable
Warriors are immune to fear.

The following stats are important for Warriors:

Warrior is a tank class that focuses on defending his or her allies. As a warrior, you have a decent damage output, using AOE abilities and single-target abilities alike. Warriors also have a multitude of useful self-buffs focusing on your defense, as well as a number of Tank branch certificates and Tank branch and warrior skills that will keep monsters on you, and away from weaker allies. The Warrior is most effective in a party, soaking up damage while the weaker allies pound on monsters- Warriors however, are virtually useless in most party scenarios without a healer to back them up. Warrior focuses on either Axes or 2H swords, or using a 1H weapon and a shield.

While playing as a Warrior, a character will change to his or her heavy armor set. It gives the highest level of defense, and you need all the defense you can get as a Warrior.

Warriors can also use many different weapons. You have two main choices in weaponry as a Warrior: either a 2H handed weapon, or a 1 Handed weapon with a shield. Some dual-wield, however, the damage output of these players is usually much less than someone using a 2H weapon, without the added defense that the shield gives. Because tof the substantial defense boost the shield gives, as well as the ability, Titan's Wall, that reduces physical damage, and numerous other defensive attributes (such as a Tank branch certificate that adds 50% defense when using a shield) many choose the 1H and shield combination when tanking difficult dungeons. When doing Solo combat, many Warriors will switch to a 2 Handed weapon, such as a Axe or a two-handed sword. As a human, it is recommended to use a 2H axe because of Warrior's Inherent Talent, Axe Expert. As a Zumi, using a club is recommended due to Zumi's "Club Expert" Warrior Inherent Talent, and as the Anuran, using a Greatsword is their best bet, due to the talent "Greatsword master" for Anuran Warriors. 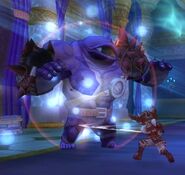 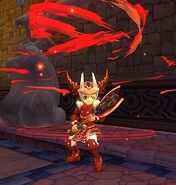 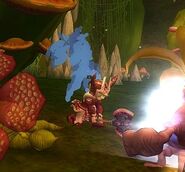 A Warrior fighting with expert skill