Eden Eternal's history survives in ancient legends, passed down through the generations. The saga begins long ago, when races from all corners of the world abandoned their homes and set sail into the horizon, each searching for a brighter future. One by one, the races arrived at an untouched land in the center of the world. On this new continent, the different races lived together in peaceful harmony, working side-by-side for their collective future. As they constructed their new utopia, each race began to form their own ideas about what was most important for the future. Tensions rose as arguments turned to fights, until the peace of the land suddenly shattered. Conflict replaced cooperation between races, and eventually war ripped the new world apart.

Hatred spread like wildfire across the land[edit | edit source]

As hope for the abundance and prosperity of the new land faded, the world fell in to chaos. Soldiers pillaged and burned the lands, orphans on the streets turned to thievery for basic survival, and remaining broken families did their best to protect what little livelihood they still had. Famine began to spread through the lands, and despair settled over all good people 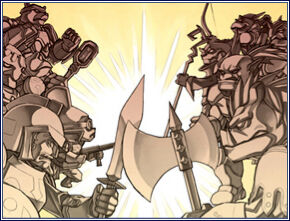 The legend continues as a mysterious group of heroes appears in the land, possessing incredible strength of mind and body. Their sharp minds let them learn quickly – faster than even the brightest pupils. Most notable, however, is their ability to use magic. Their mystical presence alone quells the hatred and despair living within the peoples' hearts. Endowed with powerful abilities, the new heroes fight to end the conflict among the disenchanted soldiers, and even driving back ferocious beasts terrorizing the towns. Slowly, the dispirited world is learning to rllll

As the heroes’ fame grows, so does their mystery[edit | edit source]

People wish to know these new heroes' origins, and how they manage to wield magic. Rumors spread that these beings emerged from crystals, as ancient texts foretell a mysterious group born of blue crystals would arrive to lead the new world’s inhabitants to "Eden Eternal." And so the people have named their new heroes the "Eternal Guardians."Enter the the world of Eden Eternal and watch the ancient tale unfold before your eyes. Help the Eternal Guardians solve the mystery of their origin and ultimately restore peace to the citizens once and for all.

Retrieved from "https://edeneternal.fandom.com/wiki/The_Soulstone_Chronicles?oldid=33798"
Community content is available under CC-BY-SA unless otherwise noted.