Magician (Chinese: ) is a Magic DPS class in Eden Eternal. It is available at character creation.[1]

Staff Expert
Magicians treat the P-ATK and M-ATK bonuses on staffs as 15% higher.

The following stats are important for Magicians:

These are this skills that can be obtained by Magicians. Almost all Magician's skills are elemental types. Magician has many burst damage abilities, that can be linked in combination for huge damage output, as well as some moderate DPS abilities. They also have access to some powerful AOE and battlefield control abilities, like freezing monsters, as well as a few useful buffs and teleports.

Magician is a powerful character who uses magic to damage monsters. Mages have access to many powerful offensive spells - however, having access to many survival skills, buffs, and some very useful abilities, mages take not just an offensive role, but a minor support and control. This is one of the most important aspects of Mages, and it is what seperates the Mage from the other starting DPS classes. Following a standard mage setup, although Mages have great power, they have low defense but a mix between useage only of cloth armor and their natural statistics. Because of this it is necessary for them stay out of the fight by casting spells from a distance. Mages can do exceptionally high damage, as long as skills are ordered in a way that takes advantage of cooldown rate.

Magic is your friend here, as well as for your friends. A Mage is just as capable as a support unit as a fighter, but with different requirements. When supporting, a Mage makes use of weaknesses or range to attack enemies from afar. In a party, you should only depend on your ally Mage for damaging/debuffing enemies, and nothing else. If they have the skills to do other things then that is up to the player, but when getting a mage, just expect them to damage the enemy unless they state otherwise. A good Mage focuses on nothing else than what they can do in battle.

Harder to pull off with a Mage than, say, a Warrior, Mages can cover less health with power, as the saying goes "the best defense is a good offence". When Maging alone or on the front lines think along the terms of "Eliminate the foe as fast as possible". If this means using up your mana on one enemy, then that is how you should play solo. Even with good items, such as a decent amount of potions both health and mana, try and stay constant on how you fight. Do you spam fire because it recharged before the casting was done, or do you swap out on abilites to pump out as much damage from your skills as possible? Stick to what you know/planned/just ended up doing in order to remove a source of damage as fast as possible.

Mages can be incredibly powerful if certain combinations of Magic DPS Branch Skills and Mage skills are combined together however, keeping the enemy at far ranges for a long time. For instance, the simple combination of Magic DPS Skills, Winter Chill, Fire Bomb, and a mage cast of Lightning bolt (in that order) gives you good damage (from Both Fire Bomb and Lightning Bolt) a 12 sec DPS affect (winter chill) a 15% chance to stun the enemy for 3 sec. with Firebolt, and a 25% chance to Knock down the enemy with Lightning bolt (from the Winter Chill Affect).

Anuran Magicians gain access to the very powerful Sirocco spell at level 45 which does magic damage in a straight line for up to 60 feet and stuns the foes for 6 seconds, this spell is very effective when used correctly with snow storm as it can stun enemies, giving them plenty of time to eliminate the oncoming foes. Used correctly, this strategy is extremely effective at killing enemies while taking minimal damage.

So this is how it goes: You cast Snow Storm then Hell Fire. Then when the group monsters are preparing to hit you you use Dimensional Jump and Cast Snow Storm and Hell Fire again. Do this until they die. (Outside a dungeon you need to be fast or they will leave combat)

Alternatively you can cast Snow Storm twice and then, if necessary, Lightning Web as soon as they come in range; at many stages in the game this is a much safer and faster way of farming, particularly if you know you can kill the group in 3 hits or less.

While playing as a Magician, a character will change to his or her cloth armor set.

Magicians generally use staffs, as doing so gives them bonuses. However, no Mage skills require them to use a staff, so a magician is free to choose whatever weapon they wish to use. It is, though, more effective to use a staff or another high M-ATK weapon than a sword or axe. 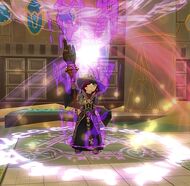