Knights are one of the four tanking classes in the game. 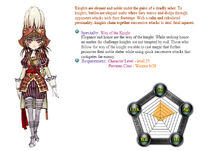 Knight uses a large amount of self buffs, and some strong AOE abilities to fend off foes.

Unlike other classes in the game, Knights have the ability to make good use of elements in 1-on-1 combat. In a scenario where the target has massive DEF/resistance, using Provoke > Maelstrom when equipped with a generous amount of elemental properties (eg. Attacks deal Fire damage +13 points) allows a Knight to dish out heavy 1-on-1 burst damage. Aside from Maelstrom's hits, Provoke's extra damage will add onto each elemental property, thus ignoring DEF/resistance.

This set-up is best suited for defensive oriented Knights to makeup for their lack of damage through CRIT.

A Knight Prepared to Fight

Knight in Action
Add a photo to this gallery

Retrieved from "https://edeneternal.fandom.com/wiki/Knight?oldid=38760"
Community content is available under CC-BY-SA unless otherwise noted.