Jesters may seem friendly, but be wary. As masters of deception, the illusionist class is highly skilled at distraction and enchantment. If their outlandish jester hats and checkered outfits aren't disorienting enough to the enemy, the illusionist can cast several hypnotizing spells and summon an arcane pet to help in battle. Illusionists can also restore mana to party members.[1] 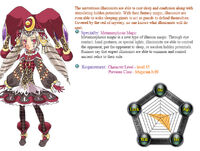 Illusionist have an easy time in Solo quest and monsters. Once your Mecha Jinn gets to a decent level, send him in, and cast Deadly Icicles a few times. Along with crit %+, its a fearsome combo that can 2 shot enemies your level.

Illusionist can use cloth armor.

It's recommended that illusionists wear armor that increases HP, because of how low illusionists' base HP is usually.

Illusionists typically use Grimoires as opposed to staves. However, like Mages, none of Illusionist's skills require you to use a Grimoire, so you are free to use whatever weapon you like. However, it is more effective to use a Grimoire or another other high M-ATK boosting weapon than a Sword or Axe.

Ideally, these are the weapons Illusionists should use:

Staff: It has a higher M-ATK then Grimoires but is weaker in melee combat. Staffs are good for M-CRIT focused Illusionists, so if the player casts Deadly Icicle with a staff the chance that the 3 hits are all criticals will be higher, there is a great chance that the unfortunate victim will not walk away alive.

Grimoire: Because Illusionists have a skill to increase ATK/Cast Speed, they can combine that with certain cerificates and/or cast armor to allow Fast Casting of spells with an effect of : casting skills at an alarming rate, and can shred groups of targets within seconds..