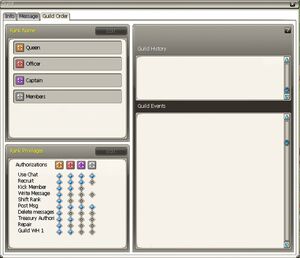 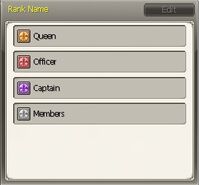 Guild Leaders can set different privileges for different members to organize a chain of command in the guild, as well as utilize the in Guild Message Board system to keep everyone informed updated or upcoming plans. Guild Leaders can also, use the game's built in recruitment system to advertise your guild, so there is less spam built up advertising the guild. As well as this, players can choose to personalize their name, (which floats above their character's head) and show off their Guild's Insignia.

Players can actively and discreetly donate to their guild of any amount they choose. This collects to a Guild Fund. funds, then go towards building the Guild's Town.

A Guild Town is a place where guild members conduct their business as well as craft and recruit merchants to sell rare, high level equipment or to gather crafting mats. Guild members would also have access to the shared Guild warehouse, which increases in size as the Guild levels.

Conditions for setting up a Guild:

Conditions for setting up a Guild town:

After level 3 your Guild will be required to pay a fee to upgrade. This is subtracted from your Guild Funds

Retrieved from "https://edeneternal.fandom.com/wiki/Guild?oldid=38633"
Community content is available under CC-BY-SA unless otherwise noted.