"Let's see.. surely something around here needs to explode."

"Engineers love using explosives and machines to prove the worthiness of technology in battle."

Engineers are masters of machinery and efficiency both in life and in combat. When not blueprinting intricate plans for new and improved armors and explosives, engineers can be found meticulously practicing and re-practicing their best battle moves. Utilize the power of advanced technology! Their clothes are made of metal from scrap parts they found, they made it themselves! They can make something out of nothing, they are highly skilled with machines for whatever the setting! 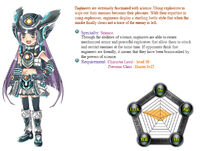 (Recommended to check out Engineer Class Skills before reading this)
Cyber Up, Engineer's most remarkable ability, is very unique in that it can make a character that is a single target, fast attacking character, to a very powerful, slower ASPD, almost Tank like AOE character. Because of this, Engineer's are a great addition to a party short on roles. Their ranged abilities are also useful for fighting bosses with AOE affect skills, as well as Bosses that have very powerful area affects: Double Door, for instance, or if an extra Tank is needed, making Engineer one of the most versatile classes.

Much like a class from the Tank Branch, Enginneer's mecha mode and AOE abilities work best in a party (or usually a "duo) with a healer: this way you can gather a large number of mobs (and stay healed up) before taking them out- this lets you get 5+ monsters in one run. One of the best healers (currently) to "duo" with would be a Bard. This is because Bard's can heal you and themselves with their party healing ability, apply buffs, and attract aggro and apply DPS on monsters with their Aoe ability, Burning Metal. Because of this, Bard and Engineer are a powerful XP-gaining force, one of the best together in the game.

Despite most of Engineer's skills being based on Cyber Up/Mecha mode, Engineer's two combat skills are very deadly and unique as well. With the application of the Ranged DPS Class skills in addition to Engineer's skills, Engineer is a force to be reckoned with. Although Heavy Artillery (a 3 second stun that does damage) and Brain Drain (a 12 second magic damage decrease for target that also does damage) are simple, they are what make the Engineer so strong. By alternating between these abilities and the ranged dps branch skills, their damage is very good, also, the probability that a monster will ever be able to hit them is very low. They can also use their ability Debug to remove debuffs from party members.

The Cyber Up skills are also very unique. Cyber up lets you turn into a mini-tank, with many AOE abilities. To start out with, you have the powerful ranged DPS applying Oil Bomb, which stacks up to three times. This skill is in general the only skill you will use for mob killing due to it's Instant cast speed and high damage with each application), and is great for attracting aggro and mobs to you because of this- it's also a ranged area affect.

The second ability is Black Explosive. Black Explosive does a great deal more damage than Oil Bomb, but is best used only after Oil Bomb has been stacked three times as It does much more damage when a target is under the Effect of Oil Bomb (more stacks of Oil Bomb= greater damage). However, It has a slow cast speed and isn't worth casting unless Oil Bomb has been stacked three times or so. Also because of it's slow cast speed, Black Explosive is not used on regular mobs: it is much easier to cast Oil Bomb three or four times.

Slime Explosive is a very damaging ability, more damaging than Black Explosive used without Oil Bomb being stacked. Slime explosive has the same kind of range as all the other AOE abilities engineer has: however, Slime explosive also immobilizes the targets in the blast for 6 seconds, or until they take damage. This is a very useful ability that can be used in many situations: however, it is mostly only good for the beginning of the fight, as the ability has a slow cast speed like Black Explosive, and Slime Explosive only stops targets from moving, and doesn't stun them, meaning if you Slime targets at close range, they can still hit you. However this can attract aggro and let a healer run away, as well if used correctly let you run away as well.

Repair is a very useful ability that allows Engineer to become more self sufficient at level 40. Armor Repair lets an Engineer heal themself- it can also be cast IN combat, which can help an Engineer a lot. 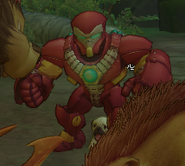 Another cyber-up form for males (?)
Français
Community content is available under CC-BY-SA unless otherwise noted.