"No! You can't read it until it's done! I have to find something that rhymes with orange..."

You are most likely to find a Bard relaxing in the shade of tall oak tree, quietly composing poems and songs. Often Bards are also found at the center of boisterous social events, wooing the crowd with charming music and dance. Little known the to the people is the colorful Bard's excellent combat prowess. Using arcane musical spells and enchantments, the Bard suavely overwhelms the enemy with waves of power chords and fast-paced hypnotic music. The Bard's gregarious songs and sonnets also have healing and defense powers. 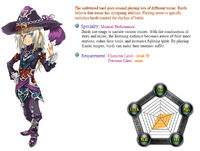 Bard is an unique support class that brings an array of buffs, debuffs and healing spells to his or her group.

Their main benefits to groups are:

Bards aren't as much of a healer specialist as Clerics, but what they lack in healing tools they make up in utility.

Though their healing capacity is crippled untill they learn Music of Life, they can easily solo heal 3-man dungeons and support their fellow Clerics in 5-man dungeons.
Constantly maintain your Music of Life stacked to 3 and throw Cure whenever its needed. Even though buffing is what Bards are specialized in, these are of no use if your group is dead.
Being grouped with a Cleric gives more freedom to cast your buffs while he or she keeps everyone healthy; but watch for debuffs and heavy damage moments, when your fellow healer might need help. You can also press control+(1-4) or F1-F4 and it will select a party member. This let's you change quickly from target to target for healing. In a party it is usually better to focus on healing, while occasionally going for a buff if Music of Life is keeping up.
To solve the issue of re-targeting to heal, look under the Chr section of the Settings options in the main menu; from here you can access a number of interface options, the most important of which is the Target option, which gives the ability to self-cast without a proper target selected (if you are targeting an enemy, you will target yourself with all supportive abilities).

Untill level 25, the Bard's soloing capacity is slow, relying only on two single target spells: Earth Shock and Vocal Bomb. However, once they get Burning Metal, combined with Poem of Wind, it's very easy to run around in circles while hitting several targets with Burning Metal.

Keep in mind that, in a group, your priorities are in this order: surviving (potions, kiting, running out of stuff in the ground), healing, buffing, debuffing and, for last, doing damage.

Bard works well in a duo combination with a Tank Aoe- a good example would be a Mechanized Engineer and Bard. This is because Bard can provide buffs, easy group healing, and mob attraction (with Burning Metal), and the Aoe can provide their powerful Aoe skills, and can Tank, keeping fire off of the Bard.

Most Bard spells require you to have a Guitar equipped, so any other weapon is out of question. All Bards are forced to wear Light Armor.